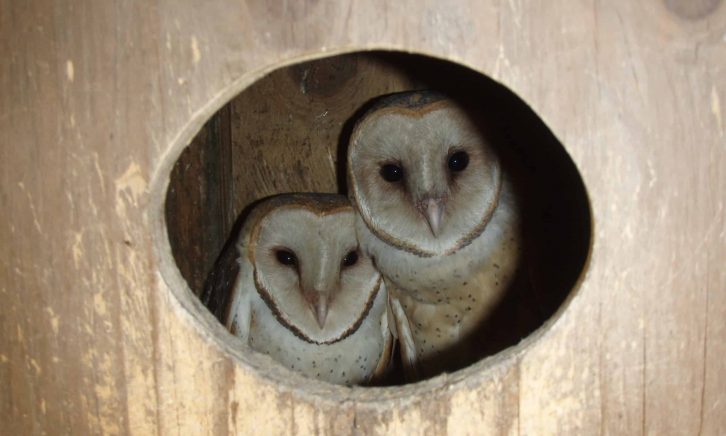 Barn Owls are found throughout most of the United States year-round. They have a white chest, and white, heart-shaped face, with cinnamon and grey colored wings and back. Their call is not a hoot like most other owls. It is a harsh, screeching call that lasts a few seconds. Barn Owls prefer to live near open grasslands, but will nest in a tree cavity or an open structure, like a barn, as their name suggests. Their preferred diet is small rodents, such as mice. Barn Owls will nest in a man-made nesting box. 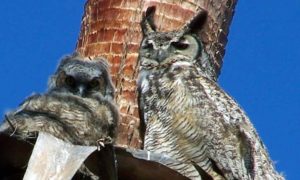 Great Horned Owls are found throughout all of the United States year-round. They are a large owl with mottled grey-brown feathers and striking yellow eyes. Their name comes from the two long feather tufts on top of their head, resembling horns. Great Horned Owls often give the classic “hoo-hoo” call, but they make a variety of noises including hissing and clapping their beak. They can be found in almost any type of environment, but prefer areas with trees. Their diet is varied, including mammals and birds as small as mice and doves, and as large as skunks, rabbits and Barn Owls. Great Horned Owls will not use a man-made nesting box, preferring to take over nests from hawks, ravens, and other larger birds. 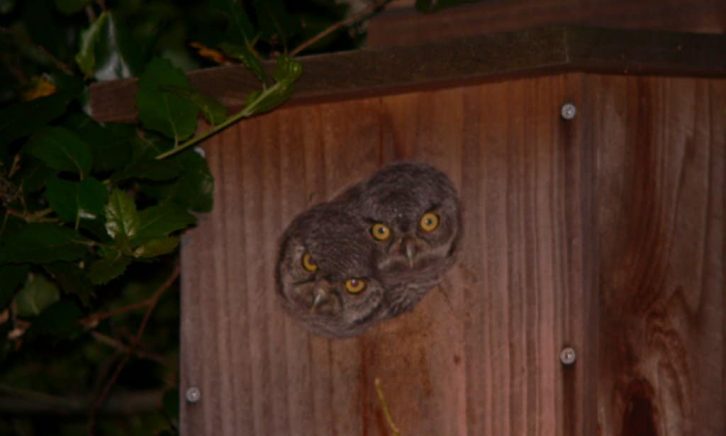 Western Screech Owls are found throughout most of the western United States year-round. They are a small owl, with grey to brown mottled feathers, and small feather tufts on top of their head. Screech Owls are very vocal, but despite their name, they don’t make a screeching call. Their most common vocalization is a series of high toots, with the rhythm of a bouncing ball. Screech Owls live in forests and open woodland areas, but can often be found in suburban backyards, parks, deserts, coastal areas and even the mountains. Their diet consists of small mammals and insects, but can vary greatly from season to season. Screech Owls nest in tree cavities, and will use a man-made nesting box. 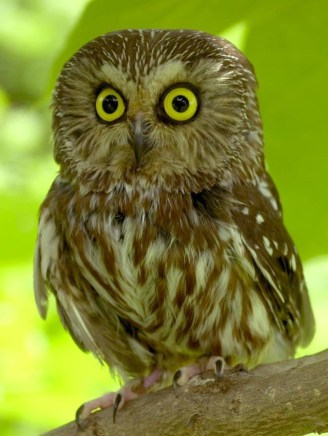 Northern Saw-whet Owls are found throughout most of the United States during their non-breeding season. The Bay Area has a year-round population, though they are a bit elusive to spot. They are a small owl with a round head, yellow eyes, and mottled brown and white feathers, with white streaks around the face. Their call is a very high-pitched “too-too” song, called out at a rapid speed. Saw-whet Owls are mostly found in mature and dense forests, but can be found in a wide range of wooded habitats. They mostly prey upon small mammals such as mice and voles, but will supplement their diet with insects as they migrate. Saw-whet Owls will use woodpecker holes as nesting sites, as well as use man-made nesting boxes.

: Burrowing Owls are found throughout much of the western United States during their breeding season. The Bay Area has a year-round population. They are a unique owl: small in size with long legs, sandy-colored spotted feathers and yellow eyes. Burrowing Owls are diurnal, or awake and hunting during the day, different from most other owls who are nocturnal. Their call is a two-note cooing sound. They prefer to live in open grasslands, and nest in burrows in the ground created by ground squirrels, prairie dogs, or tortoises, or even dug by the owls themselves. Their preferred diet is small rodents and insects. Burrowing Owls will nest in man-made burrows.